Since We Don’t Have a Boat…

Texas has received an enviable amount of rain these past however many looooong weeks. I’ve exhausted all the movie – watching I think we can handle, colored until my hands cramped and elbows ached, read books to the kids a hundred times over, and, well you get the idea.

The youngest three and I did get out a few weeks ago to the park for an unplanned adventure. But for the most part, we’ve been stuck indoors due to rain or playgrounds turned swamp grounds.

But after that last trek, I swore it would be the last of its kind. Well, I should know better than to swear off mud and rain puddles, or rain-made rivers and lakes, especially with a herd that’s 5/6 boys!

For the five year old, it only served to increase his appetite for frog catching. And the two beneath him, if they could talk, would have been equally as eager to get back and splash around in the rain water again.

So after school today, we all went to the park. The bigger four were frog catching while I tried, once again unsuccessfully, to keep the little two out of the water. It didn’t take long before I gave up and let them splash and run to their hearts’ content. 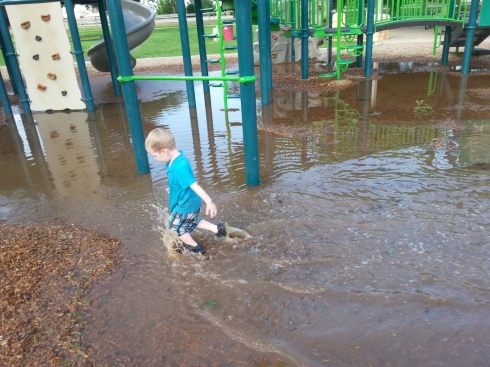 This time I was at least prepared with extra diapers, a frog catching bucket, and no where to rush to! 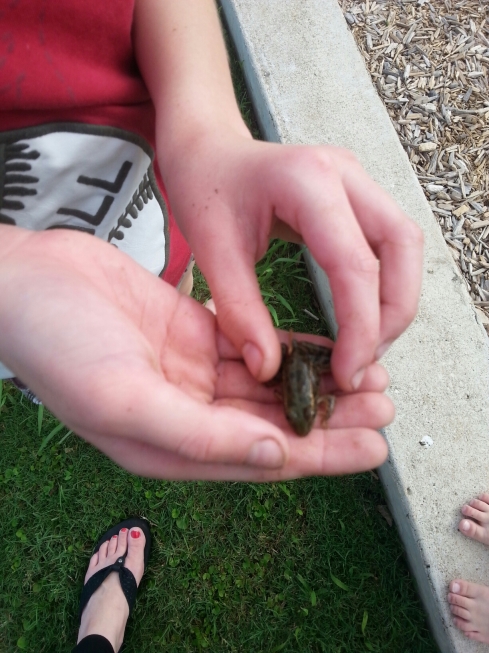 This entry was posted on Tuesday, May 26th, 2015 at 7:47 pm and tagged with flooding, frogs, kids, parenting, playground, rain, Texas and posted in Uncategorized. You can follow any responses to this entry through the RSS 2.0 feed.
« Coloring
Breathe… »

5 responses to “Since We Don’t Have a Boat…”